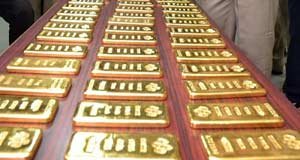 The stewardess, according to a report in an Indian newspaper, was off duty when she was apprehended for hiding 13kg of gold bars valued at $553,000 (Dh2.03 million) in her hand luggage. She was travelling as a passenger via flight EK526 and arrived in Hyderabad at 10am.

An Emirates spokesperson confirmed the arrest. “On April 9, an incident occurred wherein a passenger arriving on flight EK526 from Dubai to Hyderabad was detained by customs for carrying an undeclared quantity of gold in their baggage. Emirates has extended its cooperation to customs authorities investigating the matter.”

The cabin crew member’s arrest was the second in two gold smuggling attempts in India that day. Customs officials caught a passenger from Qatar who hid 2.7kg of gold in her clothes.