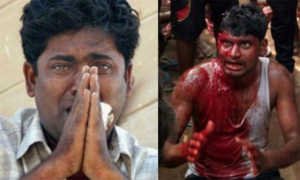 NEW DELHI —  Prominent community leaders, right campaigners and activists have warmly welcomed the Alliance for Justice and Accountability’s “Report on Rights Violations in India” released Tuesday at the Capitol in Washington DC, thanking the AJA for raising the voice against the persecution of minorities and Dalits in the country and highlighting it before the international community.

As the BJP-led Indian government completes three year in office, the US-based progressive advocacy group “Alliance For Justice And Accountability (AJA)” released the damning report on the state of minorities, Dalits and tribal (Adivasis) rights in India in Washington, DC on Tuesday.

The 64-page report, titled as “Minority Rights Violations in India” plainly speaks about the worsening situation in India with respect to violations of human rights and religious freedom that has alarmed Indians and people of conscience across the world.

Read: Alliance for Justice and Accountability in US Delivers Scathing Indictment of Minority Rights Violations in India

It puts the grim human rights situation in the country under the spotlight and suggests a host of corrective measures to the government of India led-by Prime Minister Narendra Modi who’s track record on this count is alarmingly disappointing.

The report, covering the violation of human rights of minorities and weaker sections in India, over the course of the last three years since the Modi government came to power, was released in the presence of several US senators and rights campaigners.

Prominent Muslim leader and editor of Milli Gazette Dr Zafarul Islam Khan lauded the effort and AJA people deserves our kudos. Dr Khan, who also headed the Indian Muslims’ apex umbrella body  All India Muslim Majlis-e-Mushawarat(AIMMM), opined that it would have been done by us but we lack resources.

“By and large, it is a comprehensive document that reflects the precarious situation of minorities in India since the present government came to power on the slogan of Sab kaa Saath, Sab ka Vikas“, he told Caravan Daily.

However, he pointed that “The report mainly relied upon the English media which generally gives sensitized or diluted version of incidents and happenings. It would have been better, if the compilers have also gone through Urdu press that provides undiluted version of the incidents related to the minority community and Hindi press for a contrary view”, Dr Khan said, “it would have enhanced the credence of the Alliance’s Report.”

He also pointed out towards a glaring mistake that Report does not carry the names of compilers and expressed the hope that the next year’s report would be better one.

On Indian watchdogs for rights like National Commission for Minorities, National Human Rights Commission and ST & SC Commission, Dr Khan said all these organisations are sham as these were constituted by handpicked people by the government.

Echoing his views, noted Christian leader and former member of Delhi State Minority Commission, A C Michael said  the AJA people have done a wonderful job by bringing out this voluminous  document.

“Dalits and downtrodden people have been suppressed and subjugated for centuries in the country and after the Hindutva group’s ascendancy to power, the attacks on Dalit groups have been increased manifold”, Michael told Caravan Daily.

“Brahminical order has been revived as you see a Sadhu has been made the Chief Minister of the largest populated state of the country at the instruction of RSS which is the parent organization of the ruling party.”

Commending the Report, Michael said  that it is “A very valuable document covering all oppressed and marginalised sections of the country but I doubt that the government of India would give heed to it as it is always remained in denial mood as far as minorities and Dalits are concerned.”

He also lamented that Dalits have no leadership after the demise of Kanshi Ram while Ram Vilas Paswan, Udit Raj and Ram Das Athawale all have become the stooge of the government.

Noted rights, social activist and ANHAD’s trustee, Shabnam Hashmi concurred, “It is a very comprehensive report and strong comment on the state of affairs in contemporary India.”

Talking to Caravan Daily, she said,  “Indian government must realise that it is bringing disrepute to the country at the international level due to the violence faced by minorities and marginalized communities especially since the Modi govt has come to power.”

She also urged the government that it must take the recommendations of the report very seriously.

In his comments, Navaid Hamid, President of All India Muslim Majlis-e-Mushawarat (AIMMM), said, “AJA’s document exposed the anti-minority and anti-Dalit policies of the Indian government led by Narendra Modi.

“I really doubt that the government would take any serious note of its lapses and policies exposed by the Report since it is pursuing the agenda of its parent organization.”

On the contents of the Report, Hamid alleged, “The present dispensation is working for creating an environment of hate and prejudice against all marginalized sections which needs to be countered by all peace and justice –loving citizens, otherwise, the situation would go out of hand.

“It has been a long overdue agenda of the Hindutva forces to create an environment of distrust between citizens on the basis of religion and militant Hindutva ideology.”

Hamid also lauded the compilers of the Report saying that they all “Need to be congratulated for this as in the era of darkness and animosity; this kind of academic work gives a glimpse of the severity of the situation and development in India.”

For full text of the Report on “Minority Rights Violations in India”, visit
https://www.scribd.com/document/349208337/India-Minority-Rights-Violations-Report-2017#from_embed