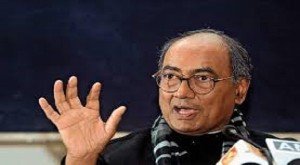 NEW DELHI (IANS) — Congress leader Digvijay Singh on Monday took on the BJP for wooing smaller parties and independents to form the government and keep the Congress, the single largest party, away from power in Goa.

“Money power has won over people’s power. I apologise to the people of Goa as we couldn’t muster the support to form the government,” Singh tweeted.

He said the Congress’ struggle against communal forces and money power politics in Goa shall, however, continue.

He later extended his Holi greetings with wishes of maintaining brotherhood in the country.

Defence Minister Manohar Parrikar, who on Sunday was projected by the Bharatiya Janata Party (BJP) as the new Chief Minister of Goa, has claimed the support of 21 lawmakers in the 40-member assembly.

The Congress emerged as the single largest party with 17 seats, not enough to form the government and the BJP with 13 cobbled up an alliance with smaller parties and independents to cross the half-way mark of 21 seats.

Goa Governor Mridula Sinha has asked Parrikar to prove majority on the floor of the Goa Legislative Assembly 15 days after administration of oath.

Previous articleUP Electoral Verdict and the Road Ahead For Muslims
Next articleRights Abuse Prevalent In Many Commonwealth Nations: CHRI