Ballabhgarh Lynching: Lack of Political Will Failed the Minorities 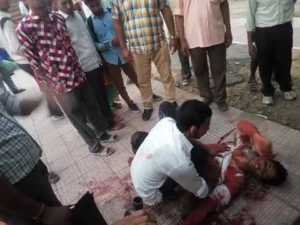 The killing of an innocent Muslim boy in Ballabhgarh by self-styled champions of Hinduism symbolises a new form of communally organised targeted violence in contemporary India. This form of violence, as it is popularly believed, did not begin with the lynching of Mohammad Akhlaq in Dadri (UP) in 2015. Instead it has evolved in the years post 1992.

The demolition of the Babri Masjid in 1992 could be identified as a decisive contemporary moment in this regard. Although the organised violence on communal lines continued to take place at regular intervals after 1992, the intensity and pace of these riots changed quite significantly.

One might observe two kinds of violent events that took place during this period – the riots with low intensity (in terms of casualties and impact) and the riots with high intensity targeting a particular community (such as Gujarat 2002 and Muzaffarnagar 2013). Interestingly, in both the cases, the violence was concentrated to a specific region/state and did not spread out.

The Prevention of Communal and Targeted Violence Bill, 2011 is very relevant in this regard. This bill, as it is well known, was drafted by the National Advisory Council in the context of the Gujarat riots of 2002. Although the bill was finally withdrawn by the government on 5 February 2014, the discussion on the bill offers us a comprehensive interpretation of the term ‘communal violence’ in recent years.

….communal and targeted violence” means and includes any act or series of acts, whether spontaneous or planned, resulting in injury or harm to the person and or property, knowingly directed against any person by virtue of his or her membership of any group’. Elaborating the term group, Section 1 (e) further clarifies that “group” means a religious or linguistic minority, in any State in the Union of India, or Scheduled Castes and Scheduled Tribes.

Section 1 (c) of the Prevention of Communal and Targeted Violence Bill, 2011

The bill, most importantly, made a serious attempt to offer a legal interpretation of the causes that often lead to communal violence at various levels.

Section 1 (f) of the Prevention of Communal and Targeted Violence Bill, 2011 says:

‘….hostile environment against a group means an intimidating or coercive environment that is created when a person belonging to any group… is subjected to any of the following acts:

(i) boycott of the trade or businesses of such person or making it otherwise difficult for him or her to earn a living; or,

(ii) publicly humiliate such person through exclusion from public services, including education, health and transportation or any act of indignity; or,

(iii) deprive or threaten to deprive such person of his or her fundamental rights; or,

(iv) force such person to leave his or her home or place of ordinary residence or livelihood without his or her express consent; or,

(v) any other act, whether or not it amounts to an offence under this Act, that has the purpose or effect of creating an intimidating, hostile or offensive environment.’

This categorisation of the context of violence and identification of possible victims stems from the policy discourse of the 90s, when mobilisation of the marginalised groups was turned into a political issue.

Hence, religious and linguistic minorities, Scheduled Castes and Scheduled Tribes at the state level are demarcated as groups that require protection against targeted violence.

Why Didn’t the Bill Become a Law?

There were two kinds of broad criticisms against the bill. It was argued, particularly by the Hindutva groups such as the Rashtriya Swayamsewak Sangh (RSS), that the bill is intentionally anti-Hindu. A letter submitted to the Governor of Andhra Pradesh on 10 November 2011 says, ‘…in the guise of protecting minorities, it (the bill) assumes that the majority community i.e Hindus are always the initiator and perpetrator of riots and violence, anytime, anywhere that may happen in the country.’

The letter also raises two other issues: The misuse of certain provisions of the bill and an overtly global Islamic threat that helps the Muslims in India to act against the Hindus.

The Bill is also ill-conceived because it has taken into consideration the majority and minority situation in India. It has totally forgotten that religion is a globalised issue now and that there are global strategies to devour smaller religions. The fund flow from outside India seems to have lost sight by the framers of this bill. Samuel Huntington’s studies have to be kept in mind on this issue.

Memorandum submitted to the Governor of Andhra Pradesh, in November 2011

These criticisms are not entirely new. The RSS’ perception of the Indian Muslims as a global threat to Hindus has been expressed in a variety of ways. Be it the discussion in the late 1980s on the desecration of Hindu temples by Muslims in medieval India to the recent debates on ‘love jihad’, the RSS evokes the global Muslim homogeneity as a reference point to assert the claim that the militarisation of Hindus is necessary for self-defense.

The second kind of criticism was based on technical grounds. The Bharatiya Janata Party (BJP), All India Anna Dravida Munnetra Kazhagam (AIADMK) and even the Communist Party of India-Marxist (CPM) along with other regional parties criticised the bill from the perspective of federalism. In a discussion on the bill in the Rajya Sabha, Arun Jaitley (who was also the leader of the House then), said:

I oppose the introduction of the…Bill. My opposition is essentially on one ground, lack of legislative competence with the Parliament to enact this Bill. ….the law and order power, the police power and the power to regulate services of the State is entirely with the State Government….these powers of the State are being encroached upon under this Bill…The Central Government has absolutely no jurisdiction. …federalism is an important component of Indian Constitutional law. It is a part of the basic structure. Chapter by chapter this Bill seeks to encroach upon those areas as far as the States are concerned.

Like the BJP, which simply tried to focus on the procedural aspect of the bill, the CPM took an almost similar stand on this issue. Sita Ram Yechury said:

…..whether the Central Government or the Parliament of India has the legislative competence to enact such a Bill which will intrude into the rights of the States, and is, therefore, violative of the federal principle of our Constitution… On this issue of communal violence, etc. there can be little dispute. The question is of the competence of the legislature to enter or encroach upon the rights of the State.

The ambivalence on part of the CPM is quite understandable. Communal violence is an important political agenda for the CPM that actually defines its ideological position in the post 1992 period; at the same time, the state level competitive politics makes it difficult for the party to ignore political centralisation.

Lack of Political Will

Two inferences can be drawn on the basis of this long drawn debate over the bill on communal violence. Firstly, it is officially documented that “communal violence” is no longer a conflict between two or more communities.

The conventional administrative view that recognises rioting as a violent manifestation of an ‘unlawful assembly’ is gradually replaced by a much more nuanced interpretation of communal conflicts.

The distinction between usual encounters and organised violence targeting a particular group was deemed necessary to focus on the specificity of contemporary communal confrontations. This was helpful in perceiving communal violence as a form of ‘targeted violence’.

Second, the Prevention of Communal and Targeted Violence Bill, 2011 seems to establish a very crucial link between marginalisation and targeted violence. Although this bill could not become a law, the definition of the “group” invoked by the bill (a religious or linguistic minority, in any State in the Union of India, or Scheduled Castes and Scheduled Tribes) undoubtedly responds to the fact that poor Muslims, Dalits, women and tribal communities are the main targets by the Hindutva forces.

Thus, lynching and killing of Muslims is not communalism; instead, it is communally organised targeted violence. Unfortunately, we do not have an adequate legal framework to deal with it; nor do a political will to oppose it stridently.

(The writer is assistant professor, Centre for the Study of Developing Societies, and Rajya Sabha Fellow 2015-2016. He can be reached @Ahmed1Hilal.