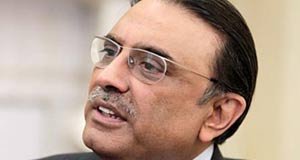 The references against Asif Zardari were reopened as after his presidential immunity ended and NRO was declared null and void.

It is expected that the former president will be indicted on next hearing in Polo Ground Reference.

The hearing was adjourned till December 23.

The references against Zardari had been deferred as he enjoyed immunity during his tenure as the President of Pakistan.

The court had earlier released several of the co-accused in the references against Asif Ali Zardari.

According to a report in the Express Tribune, following are the cases against the former President:

• Polo ground case – One pending reference surrounds the illegal construction of the polo ground and other ancillary works at the Prime Minister House, which are in violation of rules and procedure.  In this case, the court had acquitted Saeed Mehdi, while the case against Shafi Sehwani, the former chairman of Capital Development Authority, was withdrawn following his death.

• SGS – In July 2011, pronouncing its verdict in the 13-year-old graft case commonly known as the SGS reference, an accountability court absolved all the accused, except Zardari.

In the SGS reference filed in 1997, it was alleged that then prime minister Benazir Bhutto and her spouse had received kickbacks in a pre-shipment contract between the government and SGS.

• ARY case – Grant of licences to ARY Traders for import of gold and silver caused losses to the public exchequer, amounting to approximately Rs18.2 million.

The court had earlier had acquitted the co-accused Nawab Yousuf Talpur and AH Kango in the case. The Ursus tractors purchase deal allegedly caused a loss of Rs268.3 million to the ADBP and Rs1.67 billion to the State Bank.

• Cotecna – This case involved an allegedly corrupt award for a contract for supervising pre-shipment at the Karachi port.