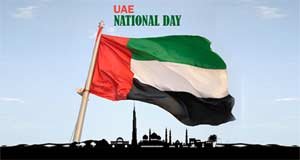 ABU DHABI, Nov 24 –The UAE Cabinet announced today that public institutions will have holidays on 1st and 2nd December, 2013, to mark the 42nd UAE National Day anniversary. The Vice President and Prime Minister and Ruler of Dubai, His Highness Sheikh Mohammed bin Rashid Al Maktoum, congratulated the UAE people on the occasion of the anniversary.Meanwhile, the Cabinet welcomed the preliminary agreement on Iran’s nuclear program, expressing the hope that it would represent a step towards a permanent agreement that would preserve the stability of the region and protect it from tension and the danger of nuclear proliferation.
The Cabinet also approved the implementation of unified guidelines and principles pertaining to the integration of the financial markets of the Gulf Cooperation Council for Arab States (GCC). The guidelines will be effective for two years after which they will be reviewed and become compulsory. Sheikh Mohammed said the federal government is inspired by President His Highness Sheikh Khalifa bin Zayed Al Nahyan’s approach regarding support for GCC integration, the GCC common Market and expansion of cooperation in the service of the people.He added that the GCC joint work would further promote economic growth to keep pace with changes in the world economy and would also support the national economies.The Vice President said, “The world’s economic challenges spur us to making the UAE’s economy more transparent and competitive as well as to face the world challenges with economic blocs or groups of states.”
The GCC project includes the endorsement of unified guidelines on transactions in shares and transparency regarding trading in futures at the GCC level, besides the endorsement of unified principles of governance for companies listed on the financial markets in the GCC.
The Cabinet approved the UAE System for Control of Halal Products, to ensure they meet the requirements of the Sharia law. It also endorsed the final accounts of the Marriage Fund, the Federal Customs Authority, the National Statistic Center and the Emirates Post Group for the financial year ended 31 December 2012.The Cabinet approved the recommendations of the Federal National Council (FNC) on the policies of the Ministry of Health (MoH) regarding the development of the health sector nationwide. The air transport agreement between the UAE and the Central African Republic was also endorsed. It is expected to have a positive impact on the national carriers, the economy and tourism.–Wam